Meetings with a Remarkable Monk


Meetings with a Remarkable Monk

This year marks the 35th anniversary of my ordination as a Buddhist monk in . One wish that I had while on this visit was to reconnect with, if only briefly with The Venerable Nanadipa. Bhante Nanadipa is of  Danish origin but has been living, studying the Dhamma and practicing meditation as a Buddhist monk here since 1968. He took Upasampada ordination at the famous Polgasduwa or Island Hermitage in 1969. I had first heard about him and met with him in 1975, in the first year of my 'pabbaja' or novice ordination. He was living at the time in a remote kuti near the scrub jungle on the south coast. The name of the kuti was in fact, Bundala kuti. I spent a few days visiting him and having inspiring Dhamma discussions with him. He had a vast knowledge of the Pali suttas and could articulate on some Dhamma topics and meditation about which I wished clarification. We also shared an interest in practicing Yoga, especially the headstand as it helped the body/mind in the process of meditation. He said that he stood on his head for over thirty minutes a day.
To get a better idea of what motivated Ven. Nanadipa to live in this remote place it is worthwhile to learn of the prior inhabitants of this famous kuti. It could be called the ‘kuti of death’.  Not a inspiring name for people with strong craving and attachment to Self, but for meditating monks with an ascetic bent, it is challenging. The most famous of the prior occupants of Bundala kuti was an English monk named, Nanavira. He died in this kuti in 1965 apparently by suffocating himself with a plastic bag. It was said he committed suicide because he had been suffering for a long time from an incurable (it seems) gastric ailment. The only way he could get any relief from the pain was to indulge in certain fantasies unbecoming of an ordained bhikkhu. So he felt that there was only two alternatives open to him: either to disrobe as a bhikkhu and return to a layman status, or to end his physical life. He believed that physical death was preferable to ‘Bhikkhu death’ (disrobing) and continuing to suffer. He believed in rebirth so he knew that he would be reborn. It was assumed by some of his close friends (through letter correspondence) that he had already attained the level of ‘Stream Entry’. Theoretically, having reached this first stage of Enlightenment would have the effect of mitigating or partially justifying his seemingly contradictory action of taking his own life. There was a lot of subsequent debate on this issue as to whether someone who had attained Stream Entry would be capable, ethically speaking, in taking even their own life. Would it not be a breach of the first precept, not to kill, something a Sotapanna would supposedly be incapable of?
Ven. Nanadipa was quite interested in studying the letters and notes on Dhamma which Nanavira had left behind in his kuti and later made into a book called, Clearing the Path. In these letters to friends he had discussed his dilemma. However at these first meetings with Ven. Nanadipa we did not discuss this topic. It was beyond my understanding at the time to bring up the subject and he did not volunteer to bring it up himself. Ven. Nanadipa did have a vast knowledge of the Pali suttas even at this relatively early stage of his bhikkhu life. His main interest was to integrate his understanding of the Buddhas’ instructions with the correct and diligent practice of meditation. He was single mindedly bent on persuing the life of a reclusive ‘hermit’ monk following the outline and details of the Dhamma-Vinaya of the Buddha. It was his dedication to earnest study and practice, not wasting time on frivolous things, which inspired me in this formative year of my own monk life.
Another of the former western monk inhabitants of Bundala kuti had unmindfully trodden on a poisonous serpent while stepping out of the kuti one night and was promptly fatally bitten. But this had not deterred the courageous hermit, Nanadipa from choosing to live there. It may have in fact encouraged him to challenge whatever remaining fear of death he may still have had. He told me his own personal close encounter with a highly poisonous snake while living in this same kuti. He had already been meditating outside in the full lotus posture and had just reached his limit of bearing up the pain when he felt a serpent slither up onto his legs. The snake proceeded to drape its’ long body over Ven. Nanadipas’ shoulder to take a nap it seems. Needless to say the great ascetic held his ground motionless and sent ‘metta’ to his new uninvited friend. After some time the serpent moved harmlessly on, much to Nanadipas’ relief. At least the experience helped him sit another thirty minutes bearing up the excruciating pain in the full lotus posture, which he may not have done on his own initiative at the time. This story inspired me to live in a remote cave at Dolukanda, near Kurunegala where I had some similar close encounters with poisonous snakes. These remote forest/jungle abodes provide a good environment to exercise more vigilance/mindfulness and ’contemplation of death’ (maranasati), much praised by the Buddha.  As it turned out, however, I was not able to match the Venerable Nanadipas’ long unyielding resolve in virtually shunning the world of social interactions, teaching, and even very limited contact with other monastics. He was and still is a real ‘loner’ after 40 years, hell bent on attaining complete Nibbana in this very life.  Even after my 30 years of travelling, teaching and living actively with other monastics in monasteries and reaching the age of 62,  Bhante Nanadipas’ dedication and ascetic way of life still inspires me.

After these few days with Bhante Nanadipa I never personally met with him again until now, 35 years later. Though I had lived in until 1977 and again from 1980 until 1986 our paths did not cross. He relished near total seclusion and did his best to minimize contact with the outside world, even visits with other monks. When people found out where he was residing and began to pay him visits he would surreptitiously change his dwelling place. He kept moving to more remote, difficult places to access. I respected his wish for solitude and did not make the effort to seek him out. Anyway I was caught up doing my own thing. But occasionally I would hear from others about where he was living and especially about one near fatal incident that happened to him.
Some years ago he had been living in a remote forest area inhabited by elephants when he directly encountered one. Despite the venerables’ radiation of Metta the elephant charged him, knocked him down and stepped on his groin/hip area. Painful to say the least. Unable to walk and with nobody around to see and help him Ven. Nanadipa laid there on the bare ground in scrub jungle for two days in and out of consciousness, until he finally managed to crawl for help. This accident resulted in one leg becoming one inch shorter than the other. But this unfortunate incident did not daunt the ascetics great courage and resolve. He continued living in remote creature infested areas and walking two kilometers each day on alms round-- to this very day.

I was very fortunate that I was able to have this brief but memorable reunion with Bhante Nanadipa. Normally he agrees to see visitors for only one week per year. Usually monks spend the traditional three months rainy season ‘vassa’ period living in one selected place from the full moon day of July to the full moon day in October. But Ven. Nanadipa, ever out for more self imposed discipline, adds on an extra three months, making a total of six months without seeing outside visitors, save people offering him alms food. After this six months solitude he travels a couple hours away to stay in a certain monastery, to tend to any personal needs, see a doctor etc. During this time he allows those wishing to have Dhamma discussions to come meet with him—but keep it to Dhamma please! Through a mutual Sri Lankan friend, a message had been conveyed to him that I was visiting and requested a chance to meet him, even though it was outside his specified time period. Besides just wishing to see him I had a few Dhamma questions I wanted to pose. Out of compassion, and perhaps remembering our friendly encounters 35 years ago, he kindly agreed to this 'Samananan ca dassanam' (seeing of recluses).

This meeting took place during his normal morning pindapata (alms collecting) routine. He walked two kilometers through the scrub jungle from his cave kuti at the base of a hill, to a designated spot where the village people also had to walk one kilometer. There he sat on a chair covered with the traditional white cloth. The villagers paid their respects to him and offered him some rice gruel to drink. Then they offered him the meal in his alms bowl which he would afterwards carry back to his cave kuti to partake of it in solitude. After he received the alms food in his bowl I came up (with two Sri Lankan monks who had brought me), paid my respects, sat down and had our friendly exchanges and lively Dhamma discussion. I informed him briefly of what I had been doing the last thirty years-- traveling, teaching Dhamma and meditation retreats, helping to run the Bhavana Forest Monastery in the . At the end of our discussions I asked for any kalyana mitta (spiritual friend) advice he might have for me. He replied that though what I had been doing for spreading the Dhamma in the world was a good thing. He thought that thirty years of outward service was enough. I had paid my dues, put in my time in that regard. Now I was near the normal retirement age. He advised that I should come back to and spend my twilight years here meditating in more solitude in order to finish the Dhamma business that was started over 35 years back. Good advice!!  Indeed, that is what I have been inwardly longing for over the past few years. This is part of the reason why I have separated myself from active involvement with the Bhavana Forest Monastery in , to help facilitate this gradual transition.
There is a saying: “Be careful what you wish for; it might come true”.

I then took my leave of great ascetic and departed.
He calmly smiled, slung his alms bowl over one shoulder and slowly headed back down the sandy path through the scrub forest from where he had come. 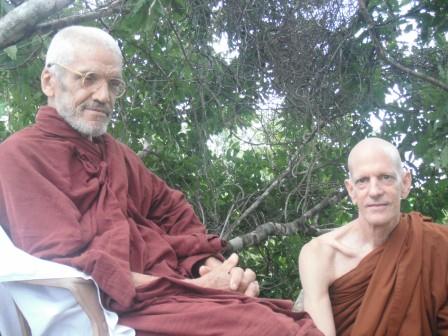 Posted by bhanterahula at 8:26 PM