Visits in Singapore and Malaysia

I left the Himalaya in Nepal on May 15th,  flying to the modern citystate of Singapore where I stayed for two weeks at the Buddhist Library. Bhante B. Dhammaratana was my gracious host. He arranged for my giving a series of four Dhamma talks for the students and devotees who visit the Library regularly. I had been to Singapore in December 2010 but had stayed only three days then. On this longer stay Bhante Dhammaratana and a few of the core supporters of the Library took me to visit a number of places in Singapore including the famous Zoo. We also went on several invigorating morning walks inside the city and outside in the reserve forests.
Here are a few photos from the visit. 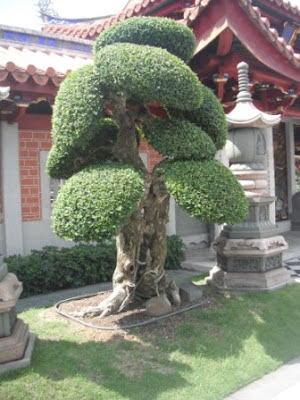 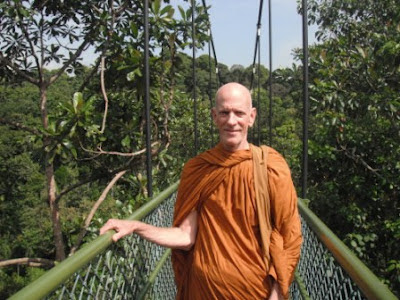 On the treetop canopy walk in the Forest Reserve 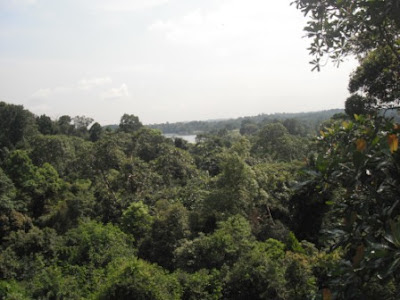 
On May 30th I took a bus from Singapore to Kuala Lumpur. It is about a five hour jouney with stops at the border for Immigration checks. Malaysia is predominently a Muslim country and women wearing the head scarves and occasionally the veil are the norm. The country is about eighty percent Muslim and the others are Chinese ancestery who are mostly Buddhists.
I was hosted in Malaysia by the Nalanda Buddhist Center located in Sri Serdang just outside of K.L.  They have a four story (including the ground floor) building that they have converted very skillfully and beautifully into a very active, thriving Buddhist educational center. There are three fairly large halls used for Dhamma talks and meditation classes. I stayed in their well appointed guest room and was dutifully attended to. I had the tecnical assistance to be able to catch up on this blog and some other projects including a longer slide movie of the trek to Mt. Everest.
Brother Tan and his office crew had arranged a fairly busy teaching schedule for me.
The day after my arrival they had arranged for me to lead a 'pindacara' alms round at the local market area. I was joined by two Sri Lankan bhikkhus from the Sentul Buddhist Vihara. Nalanda is initiating a 'pindacara' (almsround) once a month in order to get more local people aware of the Center and its' activities. This was to be the inagural event.
After an initial rest day I lead a seven day mindfulness meditation retreat held at the Nalanda Center premises itself. About twenty-two persons joined for the retreat. 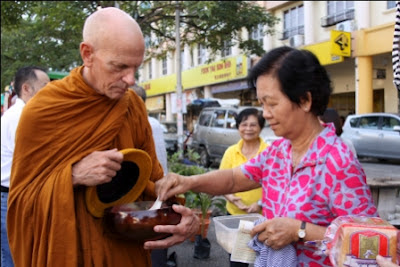 After the Nalanda retreat I had three free days which I took to visit the Baddhakaratta Monastery/Hermitage in Batu Pahat. This is a two and half hours bus ride south in Johor State. The monastery is a forest monastery meditation center for monks and lay visitors. I had heard about this monastery from friends in Sri Lanka.The abbot is Ven. Vajiradhamma and he has close ties with the forest monasteries of Sri Lanka at Mitrigala and Nauyana. From town you have to drive about a few kilometers through a large oil palm plantation to come upon the hermitage at a base of a small mountain. I used this 'down time' for three day personal retreat. I was given a nice kuti for that purpose and had just that, a delightful secluded retreat.

After my retreat I flew to Penang to visit the northwest coast of Malaysia. I had been to Malaysia twice before but not to the north states of Kedah, Perlis and Kelantan. On arrival at Penang airport I was wisked out of the city without seeeing much to the Bujang valley. The Bujang valley was the site of an ancient Buddhist and Hindu civilization. It is located off the Straits of Malacca on the ancient (and current) sea trading routes. But the muslims did to it as they had done to the Buddhist sites elsewhere where they conquered, laid waste. To their credit however, there is an archological museum and excavations which have and are continuing to uncover bits and pieces of the ancient civilization. According to my Buddhist friends and guides the Buddha statues or Hindu gods that were found in the excavations are kept hidden somewhere, not displayed to the public. The Muslims it seems do not want the non-muslims to see them. What is to fear?

That night I gave a talk at the Buddhist Association in Jitra and the following day lead a one day meditation retreat followed by another talk the second night. About twenty to twenty-five people attended which is a good turnout for the small group. That night after the talk I was driven further north to the town of Kanga in the northernmost state of Perlis on the border with Thailand. Here I stayed for three days giving talks and a two day retreat. But I had time to also visit two different cave sites, one on each side of the border.

The photos below are from the temple and caves across the border in Thailand. The border there is pretty lax for Buddhist monks anyway, so I was told. My Malaysian friends showed their identification papers while I waited in the car but my passport was not even checked or stamped going both ways.  We visited a temple fairly resembling the great Mahabodhi temple at Bodhgaya. Behind the temple was a very large cave temple in the mountain with many Buddha statues placed among the stalagmites and stalagtites which were lit up with colored lights.... Interesting. 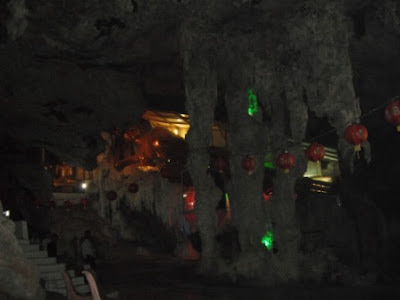 From Perlis I flew back to K.L. and then on to Kota Bharu located on the east coast on the South China Sea. Here I stayed at the Sudhamma Buddhist Society where I gave a couple of talks and lead a one day retreat. As usual some devotees there took me around to see some sights. Kota Bharu is also located near the Thai border. Across the border is where there is a lot of tension and trouble with the Muslims in the area wanting to separate from Thailand. A few days before my arrival here there had been a bomb go off in a Thai store killing a few people. I did not cross the border.


From Kota Bharu I flew back to K.L. and stayed the last few days at the Nalanda Center. I also conducted two different programs at the Serembam Sudhamma Buddhist Society and the Sungai Long Budddhist Society in Kajang.  At Nalanda I was able to put together this report and post it up before going back to India and Ladakh, my next stop.
Many thanks and blessings to them
Posted by bhanterahula at 7:35 AM