One Month in Thailand, Part 1

It's been awhile since I have updated the blog. You might have been getting tired of seeing the Buddhamas Carol up so long. I was waiting until I finished my one month tour in Thailand so I'd have something interesting to share.
This was my fifth or sixth time to Thailand since 1982, but the first time that I had stayed for a whole month. This was the first time to visit the Northeast area of Udon, Loei and up to Chaing Mai and the Golden Triangle. This trip to the North was arranged by two different Thai supporters of the Bhavana Society, the Pinits and Nine Sarasup.
I had spent the Thanksgiving holiday with my mother in Riverside and conducted three back to back weekend retreats in Riverside, Ojai, and Phoenix respectively between November 27th and December 12th.

On December 19th I flew from LAX to Bangkok. While waiting in the departure gate area for the 10:30 pm Thai Airways flight I bumped into a familiar face, that of Thai bhikkhu, Ven. Dinnanyano. He had lived at the Bhavana Society for some time several years back and is now living in a Thai temple near Riverside (I hadn't known that). He, along with five other Thai monks were going on this same flight to Bangkok. It. was a non stop18 hour flight. All us bhikkhus were politely given seats at the rear of the plane. On Thai Airways flights monks are not allowed to sit in an isle seat or next to a female, for Vinaya considerations. So whenever possible monks are given seats with nobody else sitting next to them. I won't argue that. So I had a lot of quality time to catch up with Ven. Dinnanyono and meet his monk friends. The gruelling long flight went more quickly and enjoyably.
We arrived at the Suwarnnabhumi Airport in Bangkok on December 21st at 6:30 am.  One of the other  monks is kind of well known in Thailand and he was met at the airport by a large entourage and  airport officials. They quickly whisked us off, me included, to a special lounge room, by-passing the normal immigration lines, where our passports were effortlessly processed and we were offered drinks  until our baggage arrived. I kinda like Thailand.
However, I had miscalculated the 30 day limit that tourists are allowed on arrival. I had an onward ticket to Mumbai already booked for January 20th. When I looked at the stamp in my passport it said I should depart Thailand on January 19th. In Asia, if you have the right connections most problems seem to go away. So it worked out.
I was met by Avoranee and Piriya Pinit and taken to Nee's family home near downtown Bangkok where I stayed until the next morning when I flew up to Udon Thani. In Udon I was met by Mr. Nine Sarasup and taken directly to Wat Pa Baan Taad. This is the Forest Monastery of Acariya MahaBoowa Nanasampanno who passed away, or more correctly, achieved Parinibbana just one year ago.  He was by most accounts an Arahant. Over one million people had attended his funeral. I had been wanting to visit this well known meditation teacher and  forest monastery ever since 1975 when, as a fresh novice monk in Sri Lanka I read, Forest Dhamma, a collection of  talks on meditation by Acariya MahaBoowa. I subsequently read MahaBoowa's  inspiring biography of Acariya Mun Bhuridatto, who was his teacher and who is considered to be the father of  the revitalized ascetic forest tradition. Both of these books greatly influenced and inspired my practice as a young monk in the forests of Sri Lanka.  I guess I didn't have the right kammic connections or merit to get here while Ven. MahaBoowa was still alive. But better late than never. His spirit still kept alive by the throngs of people who still come to pay homage to the late great monk and offer alms to his remaining disciples.
There are still several western monk disciples of Ven. MahaBoowa living at Wat Baan Taad. I was well received by Ajahn Martin, a German monk and given a simple and secluded open aired Lan to stay in for my two weeks self retreat.

Each day all the monks in the monastery go out for Pindapat (alms round) at about 6:15 am.into the village of Baan Taad situated about two kilometers away. However, an exception is made for monks older than 60. We could go on the shorter 'old monks' route which was just out beyond  the monastery gate to receive alms from the many people who drove all the way to the monastery. I gladly took my seniors' option which gave me more time for a longer morning meditation until 7 am. The amount of food brought in by the laity and collected by the thirty or so monks was staggering. After receiving food from only six or seven people the bowl would be filled to overflowing and we had to empty the bowlful into a large basin in order to receive more from the eagerly waiting devotees. This process of filling and emptying the bowls went on at least eight or ten times until the end of the line was reached. Then we walked back to the sala for the long process of sorting out all the food and drinks to be re-offered and distributed to the monks. About 90 percent of the food collected on the pindapat had meat and of some kind. So it is not so easy for a vegetarian. I had to sort of pick and choose the vegetables and eggs. Mr. Nine Sarsup was thoughtful enough to bring me some fresh veggies most morning. This process took about another thirty minutes until all the monks and lay people were seated and the chanting of the blessings were done. So at about 8 am we began our one and only meal of the day.

Apart from the required pindapat there was no other group practice such as chanting and meditation, except on the fullmoon and new moon days. At three pm there was a sweeping period to sweep the leaves on the broad sandy pathways pathways around and near one's kuti or lan.. It is fairly cool in the North of Thailand in January so more leaves fall at this time. The rest of the day was left up to each monk to pursue one's personal meditation practice, mainly of walking and sitting meditation. It had been quite some time since I had this much personal time and a conducive place for an extended retreat. It was quite welcome and pleasant. The one potential distraction, if one let one's mind be bothered, was the almost continual parade and symphony of chickens and peacocks all through the forest and around the kutis. It was the beginning of mating season for the peacocks so the males were out strutting their stufff, showing off their magnificent plume of feathers to attract the females. There were also a lot of turtles, tiny deer like animals, squirrels and rabbits all vying for the leftover food put out for them. In Asian Buddhist countries people bring their un useful animals like extra dogs and roosters, that thy do not want to kill to leave at the monastery, knowing that thy will not be deliberately killed. Wat Baan Taad, being so close to a village was the perfect retirement place for the unwanted animals.
So the meditators have to practice a lot of, 'hearing, hearing, hearing, or enter a deep samadhi.
A steady trickle of western lay people come to Wat Baan Taad to learn and practice meditation. There are a few dormitory buildings with single rooms reserved for male lay people within the monks section of the monastery. Women have thir own separae section, but they are kept well apart.
Ajahn Martin had been living at this Wat for the last fiften years. He was the teacher for th western laymen. Three times a week he would meet with them for two hours to discuss th Dhamma and give meditation advice. I was invited to participate at  a couple of these meetings during my stay to share some Dhamma with them. 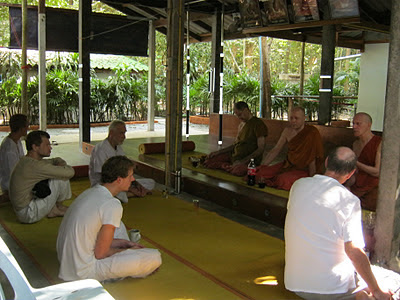 There is a second larger sala which I called the, Sala of the Arahants. It houses three life size statues of the Arahant monks highly revered in the Northeast Thai Forest ascetic tradition: Ajahn Khao, Ajahn Mun and Ajahn MahaBoowa. The sala also displays photos taken at the time of MahaBoowa's grand and spectacular cremation. Relics of cremated Arahants ar highly regarded and sought after by the aypeople. And they are prominently displayed in a museum like section of the monastery.

The day after Christmas Nine drove myself and Tan Peter, an English monk, up to the Laos Border on the Mekong River to visit Wat Hin Mark Peng. This is the monastery of another well known Arahant, Ajahn Tate.
He passed away over ten years ago. It is rather queit thse days with only ten monks living there. It is situated right on the bank of the Mekong River with nice views over to Laos. We spent a couple hours walking around and sitting  beside the river meandering by. 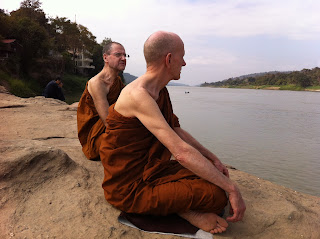