Hi Friends,
Here is an update on my visit and retreat at the Birken Forest Monastery located a thirty minute drive from Kamloops, British Columbia.
I flew from Ottawa to Vancouver on Saturday, November 2nd and was met at the airport by Tissa and Mali Kannangara. That night I gave a Dhamma talk at the University of BC at the Asian Center and the next day a  Day of Mindfulness at the same location. Both functions were attended by about fifity persons.
Then I spent two days in Chilliwack at the house of Tissa and Mali before flying from Vancouver to Kamloops and Birken Forest Monastery.
Birken Monastery is known also as Sitavana, "Cool Forest". That is an appropriate name for the Winter time as can be evidenced from the photos. It was founded by Ajahn Sona in 1994.  He had as a layman stayed at the Bhavana Sociey in 1988 and ordained there as a bhikkhu in 1989. Subsequently he travelled to Thailand and stayed in the forest monasteries associated with Ajahn Chah. On returning to the West Ajahn Sona settled in his native British Columbia and started Birken monastery.But its current location near Kamloops began in 2001. I had wanted to visit here for a long time but only this year did the conditions ripen for a visit and to lead a ten day retreat.
Ajahn Sona has been in a solitary retreat in his kuti since April 4th, 2013 and will continue in seclusion until April 4th, 2014. That is in connection with his sixtieth birthday. I did have a few occasions during this visit to have some short conversations with him.
In his seclusion the monastery is being looked after by Sister Mon, an eight precept nun and three monastery stewards. On the gound level is the spacious meditation hall with large windows facing the south. In the basement is located the kitchen and dining hall, library and walking meditation lanes. The upstairs are located most of the bedrooms which are of single and double occupancy.
The monastery is unique in that it is completely off the electric grid. The electricity is provided by solar panels and augmented by generators. Thee buildings and kutis are heated by woodstoves or propane burners.
I was given a kuti to reside in during my stay that was a good ten minute walk from the main buildings.

Different views of the monastery 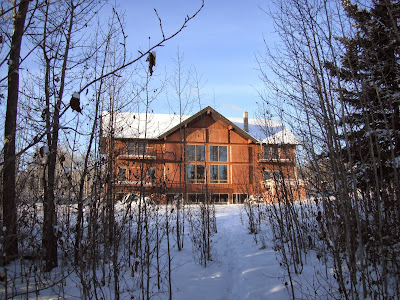 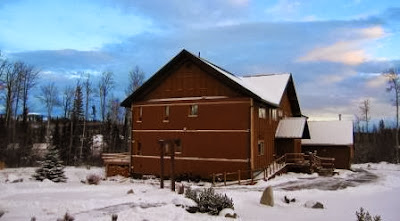 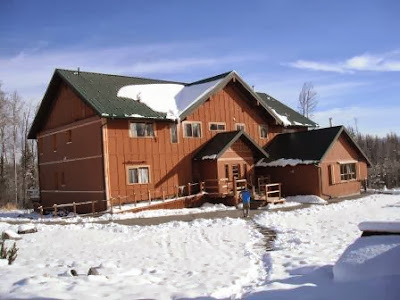 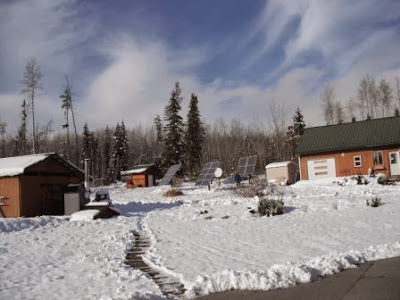 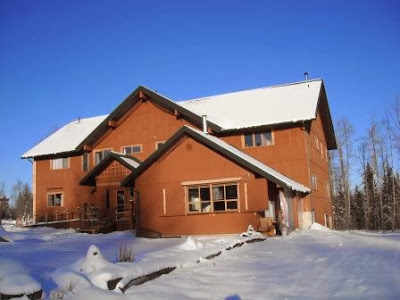 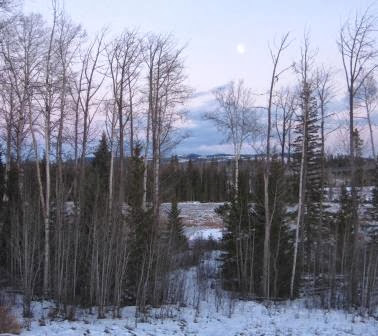 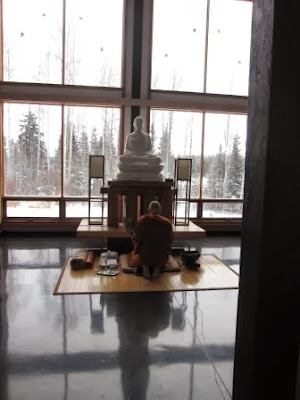 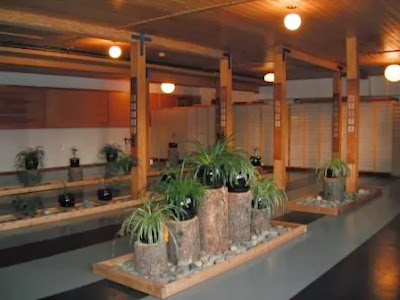 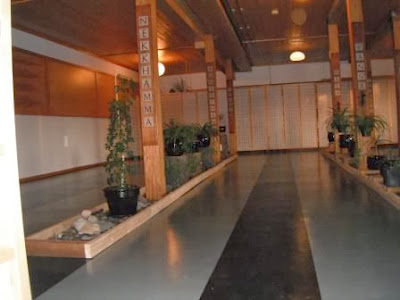 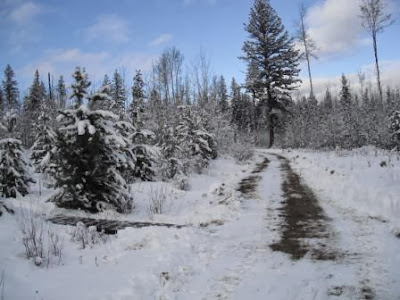 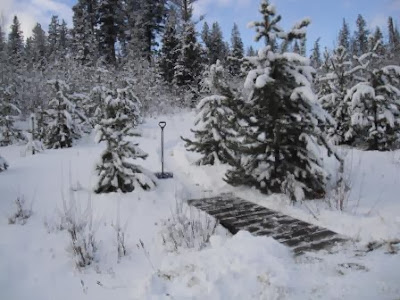 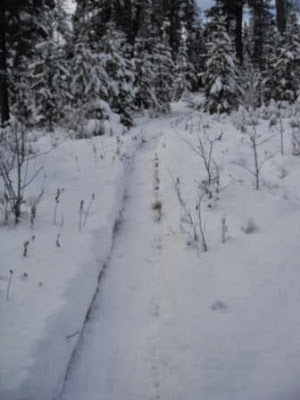 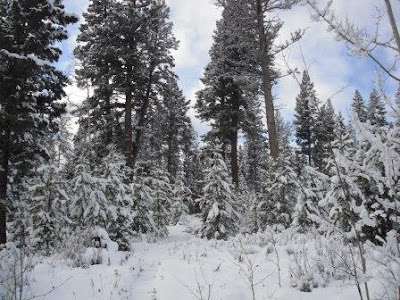 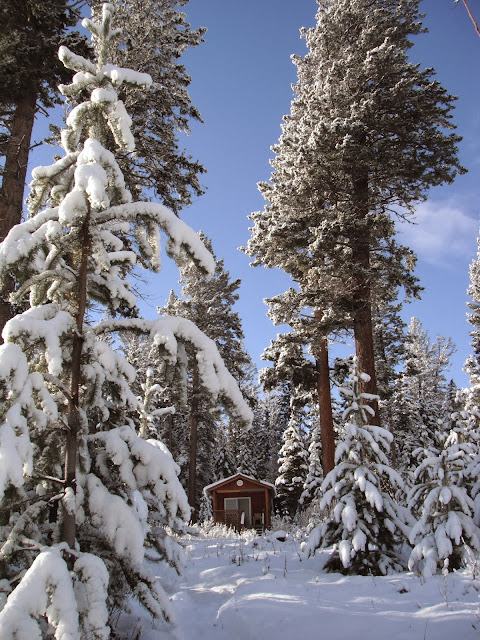 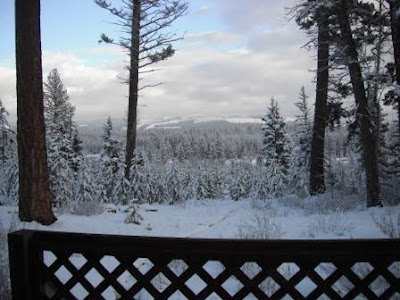 View from the kuti porch

The nine day retreat was held from November 8th until the 17th. About 17 people participated. Two people arrived from Germany and one arrived from Norway.

Photos from the retreat 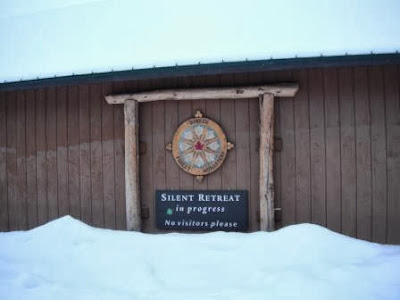 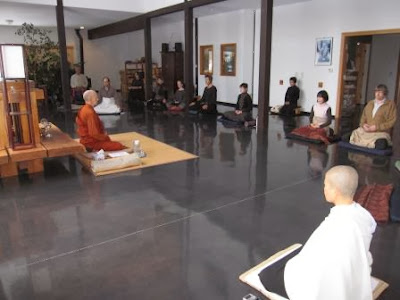 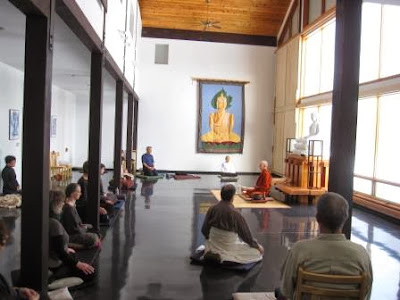 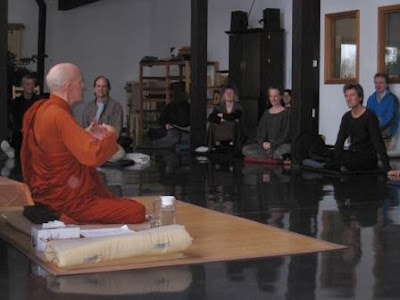 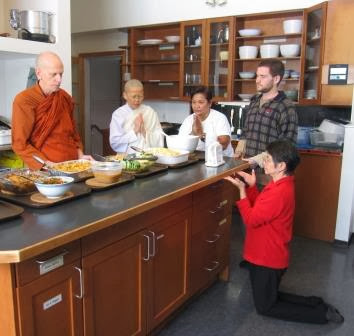 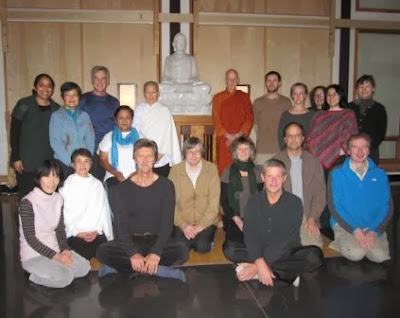 After the retreat I was driven to the city of Kelowna, a three hour drive from the monastery to give a Friday evening talk and a Day of Mindfulness on Saturday. These programs were held at the Yoga House in Kelowna. I stayed those three nights with Rasika and Nilanthi Rajapakshe who drove me to Kelowna and back to Birken.

The day after the retreat was over I walked down in front of the main building towards the marsh. There was about six inches of snow on the ground so it was difficult to see where the ground ended and the marsh began. Before I knew it I fell through the snow and was standing knee deep in the icy water. Luckily I could pull my boots and body out of the muddy bottom back on top of the firm snow. Half my robe was soaking wet and became quickly frozen and the boots were full of water. I hastily made my way back in minus 20 degree C to the main building where Ajahn Sona helped pull off the soaking boots and socks and got me to the wood stove where I began thawing out my nearly frozen feet. 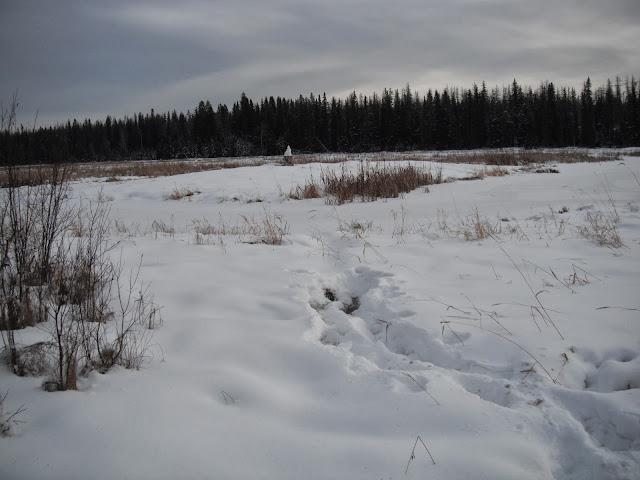 The Buddha image was the object of my interest 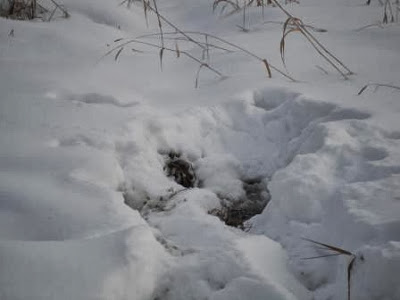 Hey, Where did Bhante Go!! 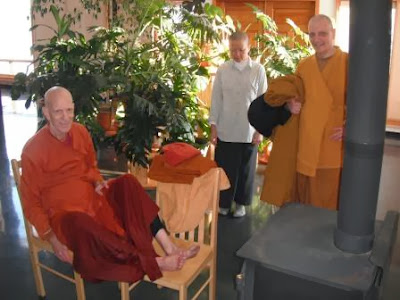 Next stop--California here I come
Posted by bhanterahula at 10:21 AM