Hello Friends,
Here is an update on my last month in the Ottawa area. The vassa (rainy season observance) is now over, the Kathina ceremony marking the end of the vassa has been held and my time in Ontario, Canada is coming to an end.

Here are some photos summing it up.

In first week in October I took another day hike in the Gatineau Park with Ven. Jinananda and Mark Cuddy to see the Fall colours. 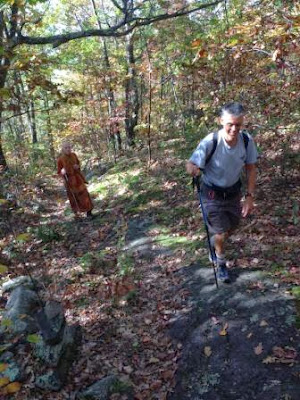 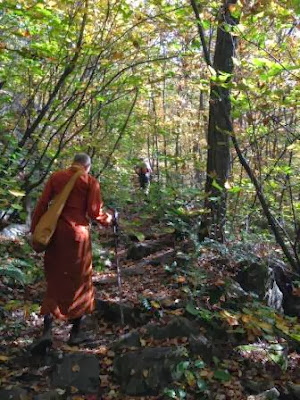 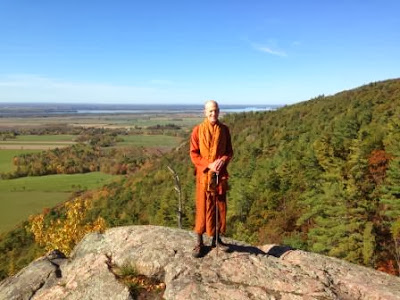 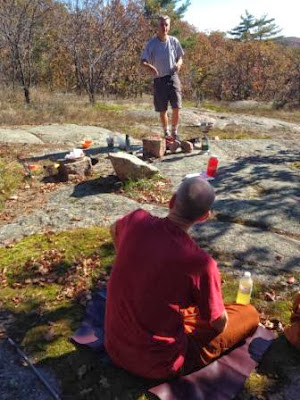 The annual Kathina robe offering ceremony was held on October 19th and 20th. Large special tents were set up in the backyard of the temple to accomodate the 200 or so people who attended. It started with a two hours Pirith chanting ceremony on Saturday evening. Buddhist monks from a few of the Sri Lankan Buddhist temples in Toronto, Winsor, Detroit and Montreal came to participate.  Pirith chanting is a traditional part of most major Buddhist ceremonies. Listening to the chanting helps to soothe and calm the mind and to invoke blessings on the premises and the people. The content of the chanting are usually the popular  Jayamangala gathas, the Ratana MahaMangala and the Karaniya Metta suttas.
The next morning Ajahn Viradhammo and Ven. Suddaso from the Tisarana Buddhist Monastery and three Bhikkhunis (nuns) from the Sati Saraniya Monastery came to attend the main Kathina ceremony. It began with a procession of the lay people carrying the special Kathina robe around the temple followed by a  BuddhaPuja, more chanting and the sumputous lunch of Sri Lankan food.
After lunch the actual Kathina ceremony took place. It consisted of a lay person ceremoniously offering a specifically selected robe to the assembled monks. Then the groups of monks select one monk who had faithfully observed the three months 'vassa season'  (from the full moon day in July through the full moon day of October) to receive that special robe.  I was the monk that was selected by impartial vote to receive the robe.  All the other monks and nuns also received other robes from the laity. 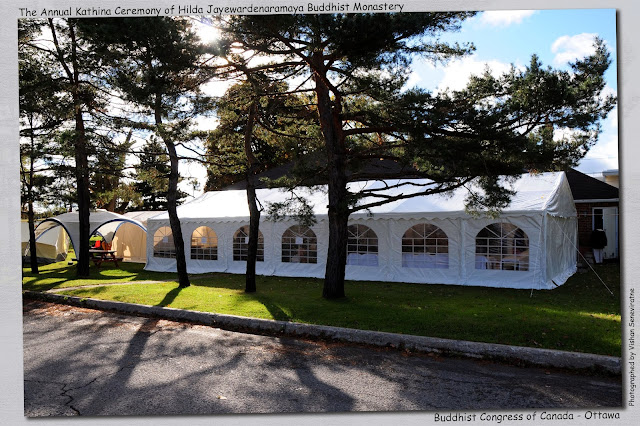 Special large tent set up in the back yard 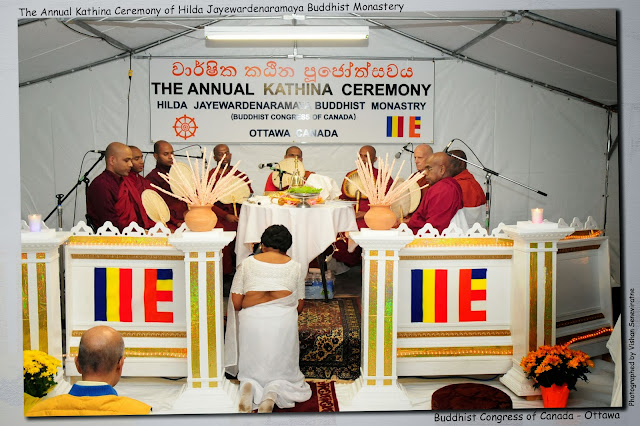 The sponsor of the ceremony offers the traditional betel leaf inviting the monks to chant the Pirith. 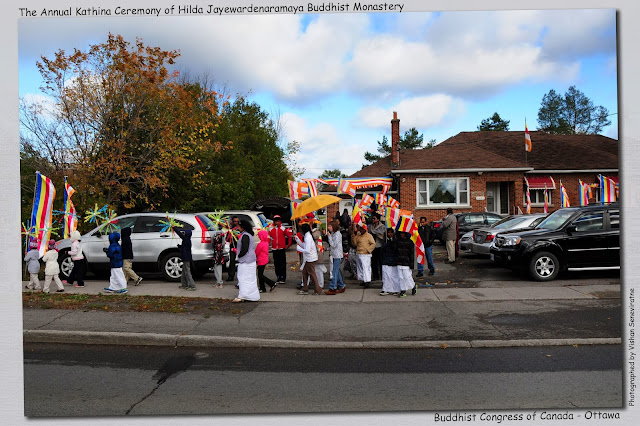 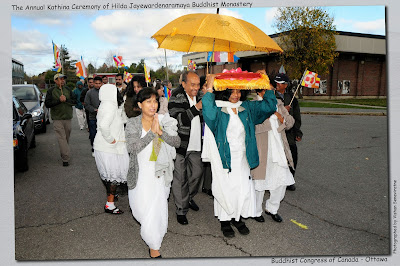 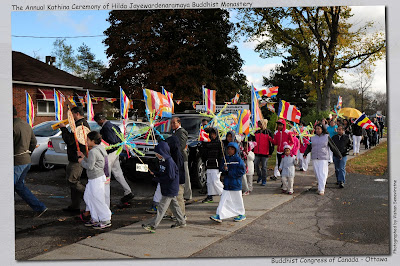 Chanting the Pali verses of the Puja 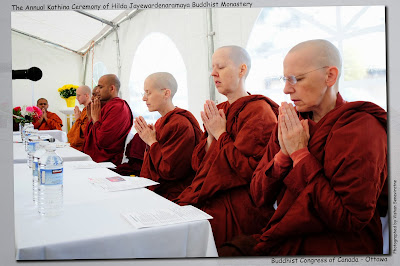 Bhikkhunis from the Sati Saraniya Monastery

Partaking of the noon dana meal 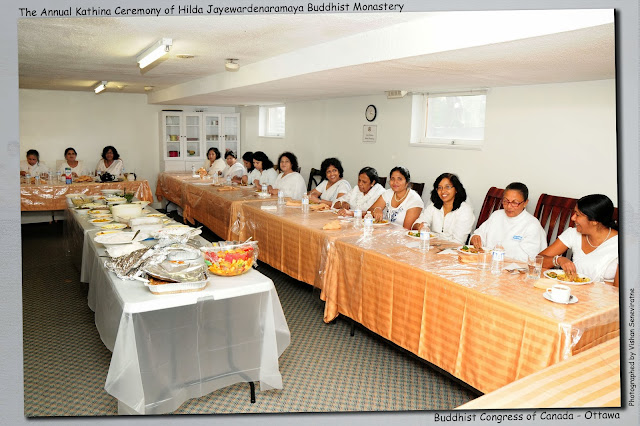 Everyone enjoying their delicious meal 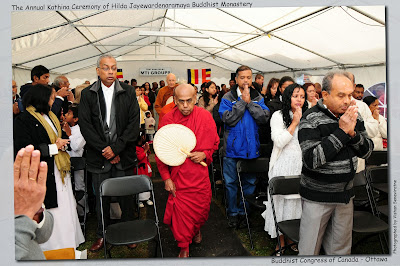 Senior bhikkhu leading the monks into the tent 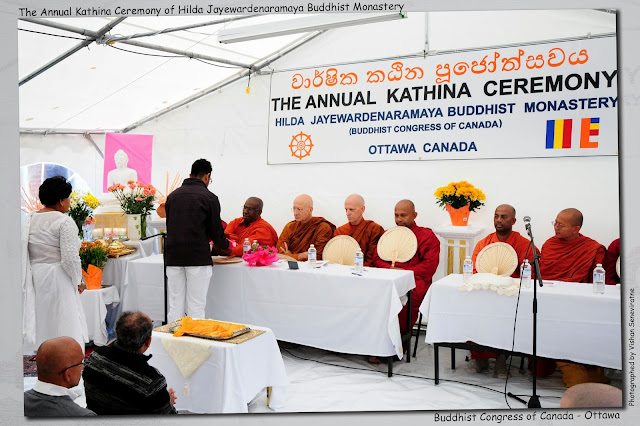 Offering the special Kathina robe to the Sangha 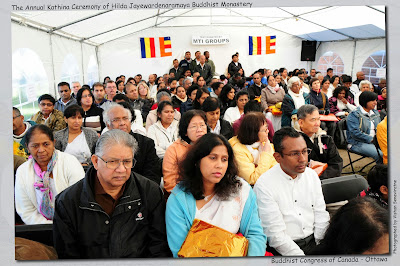 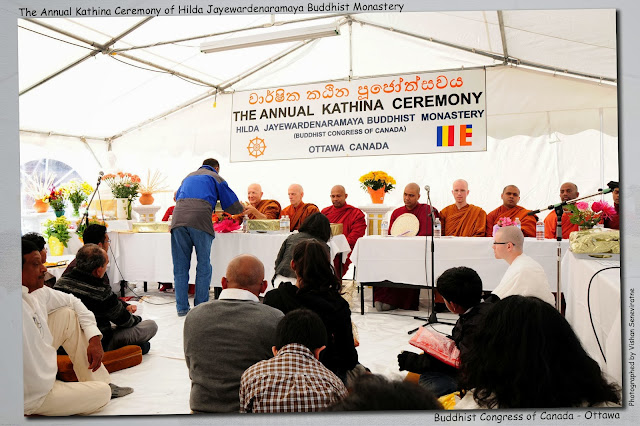 Laity offering robes to all the monastics 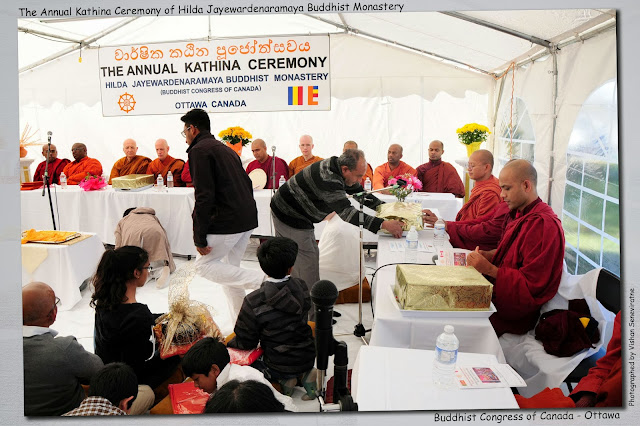 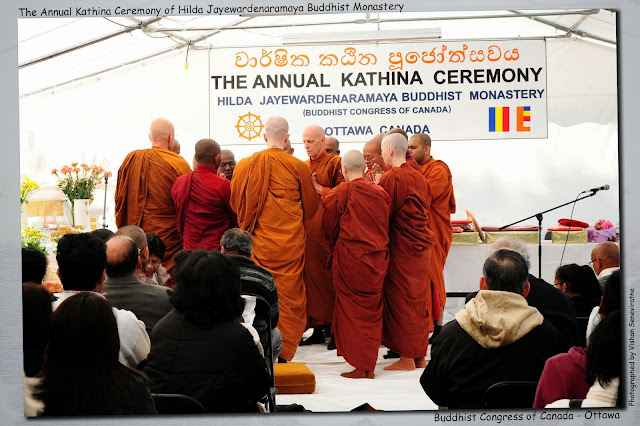 Selecting one monastic to receive the Kathina robe

Tonight, October 25, begins the seven day meditation retreat that will mark the end of my stay in Ottawa.
On November 2nd I will be going to Vancouver, British Columbia and then leading a ten day retreat at the Birken (Sitavana-Cool Forest) monastery in Mid-November.

MINDFULNESS A DAY KEEPS DUKKHA AWAY!
Posted by bhanterahula at 6:23 AM