Sri Lanka Revisited
On September 10th I landed back in Sri Lanka after a busy summer of leading retreats in Ladakh  (see previous posts). There cannot be a more dramatic contrast from the bare rocky high altitude desert and snow capped mountains of Ladakh and the hot humid lush green jungles and beaches of Sri Lanka. I stayed in Colombo for the first few days with my long time friend Gitan Rajapakse. He had also been at the ten day day retreat I had taught in Ladakh in July. After meeting several other long time supporters I went down to visit my old haunt at Unawatuna on the southern coast south of Galle. This area had been hard hit by the '94 Tsunami, but has now rebounded and looks better than ever-so to speak. This was a walk down memory lane. From those who have read my autobiography, One Night's Shelter, you will know that I had first come here in 1974 and lived here in a small kuti from '81-'86. Unawatuna beach has changed dramatically since then into a very popular tourist haven in the busy tourist months between December and March. I stayed here two days meeting some of the people who had so generously supported me with food on my daily 'Pindapatta' almsround back in those days. 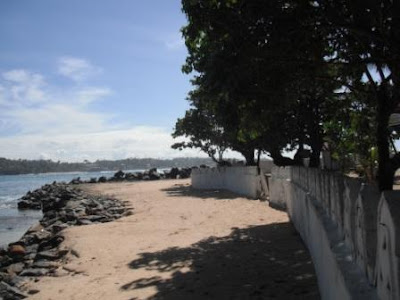 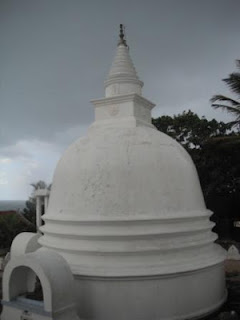 Everything is subject to change

Gitan had oraganize a four day meditation retreat for me to teach on Hantane mountain above Kanday. It was held in the newly constructed Mount Royal hotel  at the end of the mountain road.  28 persons mostly from Colombo came up for the retreat. The retreat went off very nicely  and everyone was satisfied and happy afterwards.
Following the retreat Gitan and I made a three day road journey through the Northern Provence to Jaffna and back down to Trincomalee. We were accompanied by another Western monk, Ven. Guttasila. He has lived in Sri Lanka for thirty years. The Northern Province was closed to tourists for thirty years during the war with the LTTE. Since the war ended two years ago tourists are now once again allowed to travel through the area to Jaffna. In the Jaffna area there are a few ancient religious sites: The Naga Dipa Buddhist temple and a Hindu Kovil; the site where the Arahat Sanghamitta came ashore bringing the sacred Bodhi tree sapling; and a burial site for Arahants. Naga dipa is an island situated a few miles of the coast from Jaffna. One needs to ride a ferry to get to the island.We visited these places and then then spent the night in a hotel in Jaffna town. The next day we drove down to Mullattivu and Trincomalee. On the way we saw some of the effects of the long destructive war with the LTTE, which are slowly being cleaned up, including de-ming the area along the roadside. Closer to Trincomalee we visited another ancient Buddhist site, Thiriyaya. Thiriyaya is an ancient stupa marking the spot where the two Burmese merchants Tapussa and Baluka enshirined the 'hair relic' of the Buddha. According to the historical record these two men had met the Buddha just after his Enlightenment near Bodhgaya. They were the first to take the Three Refuges and Five Precepts directly from the newly Awakened Buddha. They were his first two lay disciples.
As a momento the Buddha gave them a few strands of his hair. These 'hair relics' it is said were later brought to Sri Lanka by Tapussa and Baluka and they had this memorial  stupa  erected. This then is the first Buddhist stupa erected on the island of Sri Lanka.
We spent our last night at a hotel on the Niliveli beach just north of Trincomalee town. In the morning we did our early morning predawn meditation on the wide sandy beach followed by a series of Yoga exercises with the rising sun. I hadn't been able to do that in a long while. 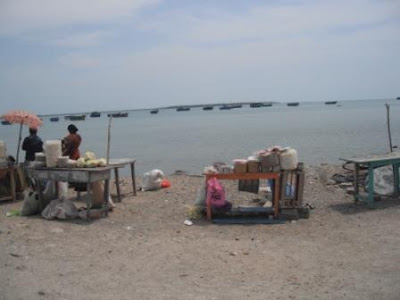 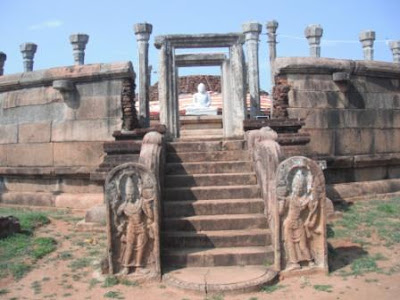 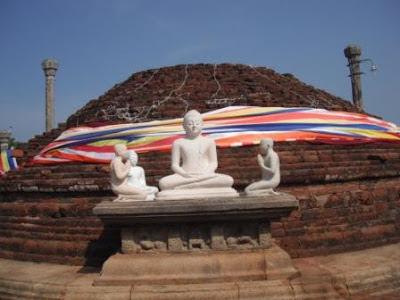 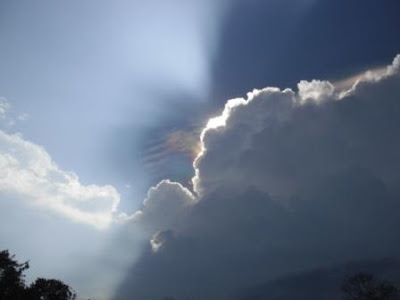 Posted by bhanterahula at 8:27 AM 2 comments: