One Month in Thailand, Part 2

(Please scroll down to Read Part 1)


On New Year's eve day Mr. Sarasup drove Ajahn Martin and I to Wat Salanoi to visit Ajahn Dick Silarato.
It was a three hour drive from Udon through the mountainous district of Loei. Ajahn Dick is an American originally from Virginia. He had been a disciple of Acariya MahaBoowa and living at Wat Baan Taad since 1977. He had visited the Bhavana Society in West Virginia several times where I had first met him. He is now in the initial plans of building a 'Forest Dhamma Monastery' near Lexington, Virginia, a three hours drive from the Bhavana Society. At Wat Salanoi he has a group of  five young American and German bhikkhus who he is hoping will become the nuculeus of the first bhikkhu sangha to live at the new Forest Monastery.
We arrived at Wat Salanoi just in time to begin an eight hour New Year's eve chanting and meditation session from 6 pm until 2 am. Then at dawn we went out on the New Year Pindapat.


On January 4th I travelled to Wat Muang Kai, another Forest Monastery, for a one week stay.  I went with a group of three Thai women from Bangkok They had arranged for me to lead a five day meditation retreat for them and others staying at the Wat, including some young monks.
Wat Muang Kai sits on a mountaintop with great views of Loei district. Wat Munag Kai is less than an hour's drive from Wat Salanoi. There were many young, junior monks staying here. A couple of them took very good care of me. Each morning I went out on a short Pindapat with the Abbot, Ajahn Khanti. They had just finished renovating a specious modern kuti with large picture windows facing the many mountain ranges stretching out in front. The kuti was intended for use by visiting senior monks. I guess I fit the bill. They insisted that I stay there.
I was there during the full moon so I could participate in the Bhikkhu Patimokkha recital with all the other bhikkhu. The bhikkhu who did the reciting chanted so fast that it was barely intelligible to me. Every day for for hours we had our semi retreat with meditation and a Dhamma talk held in the large Meditation sala. Upasika Chaniga translated my talks.
Before leaving we visited another interesting temple in the Loei District.


On January 11th we drove back to udon and I flew from Udon to Chaing Mai to begin a one week tour of North Thaland. I was met at the chaing Mai airport by the Pinits and taken to a private estate used as a meditation center for people from Bangkok. We stayed 3 days in the Chaing Mai area visiting various monasteries. One day we drove through the nearby jungle and forested mountains to visit the Temple of the Buddhas' Footprint. On a huge rock lies the impressions of four concentric footprints (if you have a good imagination), the outer one the largest and the innermost the smallest. They are said to be the footprints of the four last Buddhas. The inner smallest impression is said to be that of Buddha Gotama. I forget the names of the three previous Buddhas. It seems highly improbable that all four Buddhas put their foot here in the same spot, each being many thousands of years apart. But no other than the great Acariya Mun Bhuridatto, who had all the psychic powers, and who had visited this spot in the 1930s is said to have confirmed this. The Temple here, completed just last year is quite a show piece.
From Chaing Mai we drove on up to Chaing Rai where we stayed three nights in the house of an old friend of Nee Pinit. The highlight of the trip here was a visit to the Golden Triangle where the three countries of Thailand, Burma and Laos meet on the Mekong River.  The once infamous area of opium cultivation is now mainly a tourist destination. Opium production is no longer visible but Casinos are the big draw and cash earner. There is a big Casino built by the Chinese on the Laos side and another one one the Burmese side.
Thailand bans Casinos so Thais are the main customers.
On January 18th we flew back to Bangkok and on the 20th I flew to Mumbai. 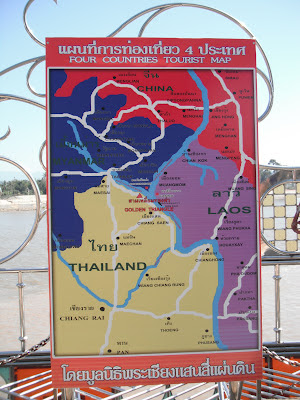 Posted by bhanterahula at 1:53 AM