Dear Dhamma friends,
As many of you may know I am intending to spend the summer and the 'vassa' rainy season period here in Berlin, Germany. This is a little update on what I've done so far here in Europe since arriving on May 19th.
Upon arriving at the airport in Zurich I was told that I could only stay for three months in the Euro Zone countries because of the new Shengen agreement amonst Euro Zone countries, including Switzerland, which is not a member of the EU. So I will have to try and get my visa extended here in Berlin. With a letter from the Buddhistiches Haus Temple where I am staying, it should not be a problem. I'll have to wait and see. All things are impermanent.

My first stop was at the Metta Vihara Forest Monastery (Waldkloster) about 15 kilometers from Kempten in Allgäu. It was started by Ayya Khema just before she passed away. The abbot is Ven. Nyanabodhi, a direct disciple of Ayya Khema. There are two other resident monks living there also, Ven. Anuraddha and Ven. Kaccayana. They recieved me and treated me very kindly. I stayed there three days before heading to the Buddha Haus where I conducted a one week meditation retreat.
At the end of the retreat on May 28th I went to the Anenja Vihara and gave a Dhamma talk in the evening. The Anenja Vihara is located only a few kilometers from the Buddha Haus. It is a monastery for Buddhist nuns and lay women. The current Abbess is Ayya Sucinta who I have known for many years. Ayya Sucinta was ordained as a novice nun by Bhante H. Gunaratana at the Bhavana Society in the late ninties. and took Bhikkhuni ordination in Bodhgaya over ten years ago. Inbetween she had lived in Burma, again at the Bhavana Society and in Melbourne Australia where she had helped start a Vihara. She accepted the invitation to become the Abbess of the Anenja Vihara just last year.
I again stayed a few days back at the Metta Vihara after the retreat. This summer they are having four new kutis erected on the men's section of the monastery.

On June 1st I went to Füssen at the base of the Alps where the Fairytale like Castle of Neuswanstein is located. There I went on a lovely six hour walk with two old German student/friends on a beautiful day.
I then took a train to Geneva Switzerland and stayed three days at the Geneva Buddhist Vihara with Bhante Dhammika from Sri Lanka. I gave a half day meditation program to a number of devotees and meditation students. By coinsidence an old Sri Lankan monk friend of mine was there, Ven. Homagama Kondanna, whom I had not seen for over 20 years. So it was nice seeing him again also.
From Geneva I took a train up into the Alps to Zermatt to see the Matterhorn. I took the Goneratt train up to a height over 3,000 meters for a spectacular view. It truly is an impressive Peak. Unfortunately I did not have enough time to do any hiking in the vicinity.
From there I continued by train to Lugano, in the Italian part Switzerland where I stayed with Albert Cambata, a former Board member of the Bhavana Society who now lives with his family in Lugano. I had a lovely all day drive on the windy roads of the Alps in his new yellow Ferarri convertible. I had to practice non attachment and equanimity.
From Lugano I went to Interlaken hoping to do a trek in the Jungfrau high Alpine region. But the weather was really not cooperating. It was super cloudy and a little rainy. Even so, I took the spectacular cog wheel train up to the Jungfraujoch at over 11,000 ft.elevation. Being literally within a stone's throw distance, I could not see even a trace of the massive threesome of the Eiger, Mönch and Jungfrau. I had to practice more non attachment and equanimity of the opposite kind and settled for a short walk in the snow and then a four hour downhill walk in the cold drizzling rain. That night I boarded the night train from Zurich to Hamburg.
Next on my teaching itinerary was my regular nine day retreat at the Haus Der Stille, forty kilometers from Hamburg.There were nineteen participants and the weather held up quite nicely so we could have most of our afternoon yoga sessions out in the spacious grassy area. Three quarters of the participants were my faithful regular students and it was  nice warm intensive practice atmosphere.
On June 20th I took the train to Berlin where I am intending to spend the entire summer.
I spent my birthday with my oldest and long lasting friends in Europe, Asha and Keshav Rekai. They took me out for a birthday Dana at their favorite Chinese restaurant near their Yoga school in Wilmersdorf.
That weekend I conducted a weekend semi retreat at the Lotus Vihara Buddhist Center in the heart of Berlin.
Despite the name, Lotus Vihara it is not a center where Buddhist monks reside. It is a center started and run by disciples of Ayya Khema. The main teacher there is Dr. Wilfried Reüter. It is located in the heart of former East Berlin. They converted an abandoned school for children into one of the most active Buddhist Centers in Berlin. About one hundred people came to the Public talk on Friday night and over thirty people participated in the meditation program on Saturday from 10 am to 6 pm and again on Sunday from 9 am to 1 pm. I gave another public talk that night with about one hundred people coming to listen to the Similie of the Raft.

An interesting kammic coincidence occured while taking a walk in the Tiergarten Park. I had read in a Berlin Yoga magazine that there is to be a World Culture Festival organized by Swami Sri Ravi Shankar in Berlin July 2 and 3rd. I was thinking that it might be interesting to go if someone would take me. Then that afternoon while walking in the Park with two Dhamma students we met that very Swami who was also walking with a retinue of folllowers. We greeted each other with the traditional namaskar mudra. After some amiable talk he invited me as a special guest to attend that function with free passes to as many friends as I wanted to accompany me. It's a small world.

The Buddhistiches Haus Frohnau
Now I am happily ensconced at the famous Buddhistiches Haus Buddhist Temple. It sits on top of a small hill
in the leafy suburb of Frohnau, in North Berlin. The Buddhistiches Haus was started in 1924 by Dr. Paul Dalke, a German doctor who had travelled to Sri Lanka a couple of times and had become an admirer of of the Buddha Dhamma. It was the first Buddhist Center in all of Europe. In 1952 it was acquired by the German Dhammduta Society of Sri Lanka who have been managing it ever since. They have been having a succession Sri Lankan monks staying here since 1957. I had first come here to Berlin and seen the Temple in 1977 on my return from Sri Lanka two years after my novice monk ordination. Over the years on my many teaching tours to Germany I have stayed here for short periods of time, given talks and lead some short retreats. Because of a lull in time I decided to stay this year for a longer time in Berlin and spend the vassa period here at the Buddhistiches Haus. Mr. Tissa Werraratna, who is the Sri Lankan manager of the Temple vey kindy accepted me to stay. I will be conducting three meditation retreats here over the summer period.
The Buddhistiche Haus is considered a historical monument in Berlin. And after many years the Historical Monuments office in Berlin has agreed to spend a few million Euros to restore the time weary buildings and grounds back to their original appearance plus other needed improvements. I had a talk with the members of the government offices who were here making their final decisions. (see photos)
The work is now underway.


May All Beings be Well Peaceful and Happy

Please consult the Travel and Teaching page of this blog for the dates of my retreats at the Buddhistiches Haus as well as the other teaching locations outside of Berlin until October. 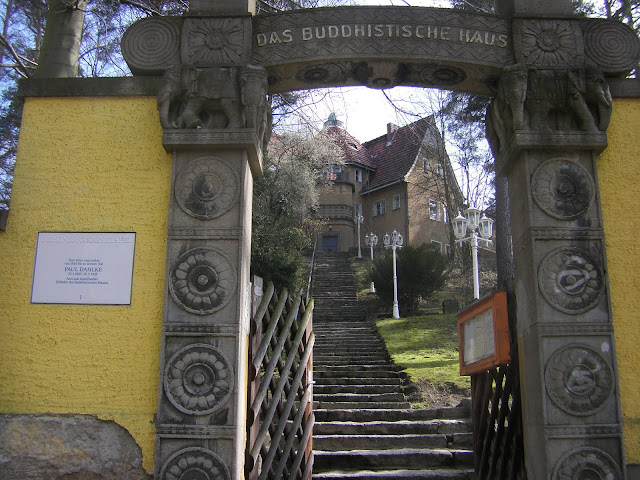 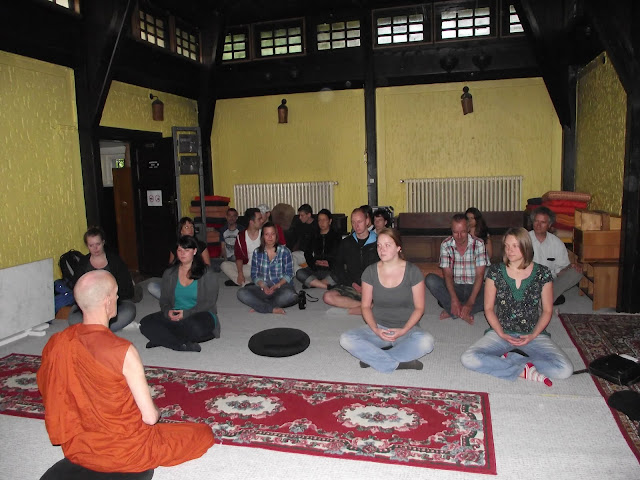 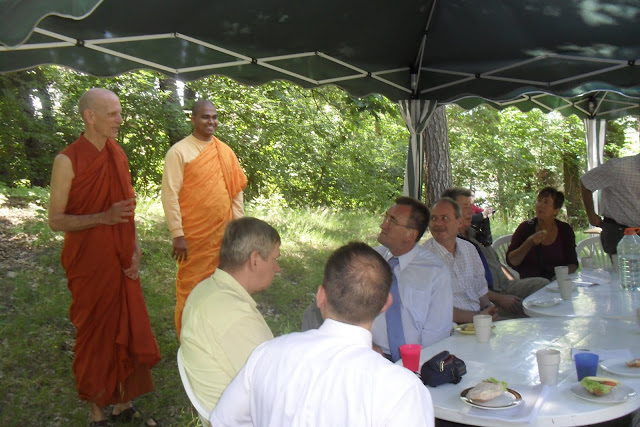 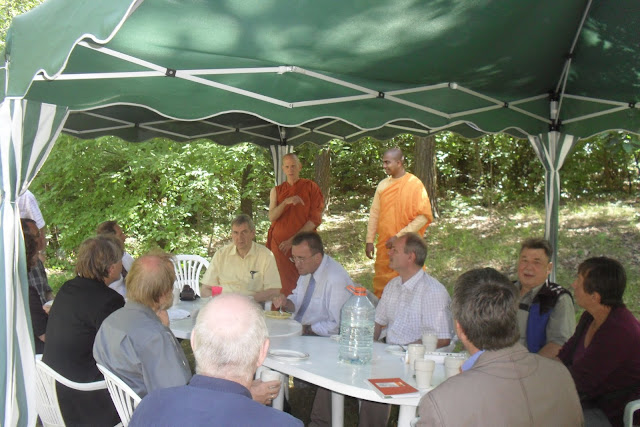 Posted by bhanterahula at 1:45 AM